Finally! The triangle that came into existence in Girl Meets Texas Part 1 has been laid to rest where it belongs. We can all take a deep sigh of relief now and turn our attention to other aspects of this magnificent show.

I was utterly amazed at how the writers wrapped this messy triangle up. I am continually in awe of how much depth they are able to incorporate into each, 22 minute episode. The writers are able to do this because they are experts at foreshadowing, setup, and keeping running plot threads going that they can recall in a moment’s notice.

Girl Meets Ski Lodge Part 2 is probably the greatest example of this. This masterful episode brought so many moments together, starting from the pilot episode in Season 1 and going through the seasons from there.

I could not be happier with the result. The writers managed to destroy the triangle while only lifting our hearts up. I could go on and on, but I’ll consider your valuable time. Instead, here are a few of the very best aspects of Girl Meets Ski Lodge Part 2.

Lucaya ended, but our hearts were not broken.

I’ve made it no secret that I was pulling for Lucas and Riley from Day One of this aggravating triangle. I wanted the quirky, non-“cool” girl to get the handsome Western hero. I loved the way they interacted. I love the expression on Lucas’s face when he looks at Riley.

Still, I know there were a lot of fans pulling for Lucaya. They loved the interaction between Lucas and Maya. The conclusion of this triangle had the potential to grieve Lucaya fans deeply, but our GMW writers are just too good to leave broken hearts behind.

Instead, they had Maya end Lucaya naturally and gently by discovering that she, Maya Penelope Hart, doesn’t care for Lucas that way. Now that she remembers who she is, she is happy to keep Huckleberry as a good friend and nothing more. The look of sheer relief on Lucas’s face was beautiful. He could never hurt her, and she saved him from that burden.

But even better, the person who helped Maya come to this conclusion wasn’t Riley, it wasn’t Evan, it wasn’t Farkle, it wasn’t even Maya herself. It was….JOSH! Uncle Boing, the boy she has cared for in her heart of hearts since Season 1. The pure joy and radiance on Maya’s face during her conversations with Josh in this episode made angels sing. I can’t imagine anyone NOT being happy for Maya and Josh.

Josh became possible, and it was perfect.

According to the writers, Josh was supposed to have been a larger part of Season 2. However, due to a near-fatal motorcycle accident, Uriah Shelton (Josh) had to be absent during the beginning of this triangle mess. I honestly wondered how they were going to bring him back into the story and introduce growth in his character when we hadn’t seen the progression of maturity.

I had nothing to worry about. Josh Matthews comes onto the scene with a depth of maturity that he has not shown before. His position as the chaperone during the ski trip, and his role as guide and mentor completely pulled his character onto the relevant timeline and made up for any lost episodes.

“Why have you let me hold onto your hand this entire time?”

Mature people know that the value of a person isn’t dependent upon age. Before, Josh was too immature to see past 3 measly little years. But now that he’s grown up and has a desire to be a mature person, he can recognize the incredible treasure that Maya is.

“For me to think that I don’t ever need a friend like you, in the world, just ’cause I’m a little older? That’d make me a lot less mature than I wanna be.”

Oh, just watch his cute face. I could just eat up his facial expressions and Maya’s along with them.

“You once said you were playing the long game.”

“I’ll play the long game. Live your life, I’ll live my life, I know you’re out there and….I’m out there too.”

Eat it up, people. Every person who has ever loved someone older is crying their heart out right now. We are SO happy for Maya!

Purple shirt, purple jellybean, his favorite thing in the world, it was Riley all along 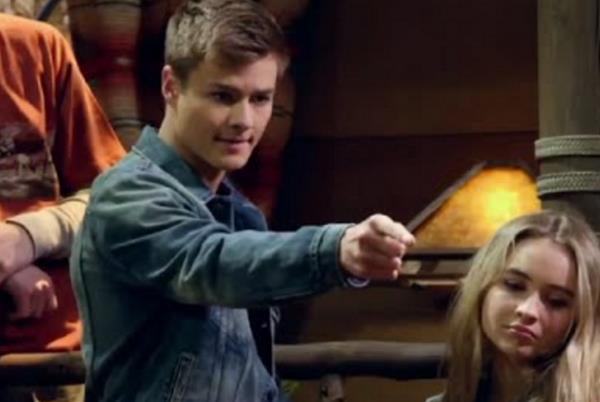 Lucas comes down the stairs wearing a purple shirt. His face falls and he looks both threatened and devastated when he sees that Riley spent the entire night having a heart-to-heart with another guy. Why?

“My favorite thing in this world is when you talk to me.”

“It’s okay for you to talk to whoever you want, Riley. You know why? Because I am a secure Western hero.”

“But the important talks, the ones that we’re gonna think about and always remember….can those just be between you and me?”

Lucas has opened up his heart to Riley in a way that he has to no one else. She touched a deep place in him and he fell in love. The best friendships and romantic relationships are built on a deep, lifelong conversation. It is when we converse deeply that we reach each other’s hearts and souls. Riley reached Lucas’s, and she has owned his heart ever since.

“Mmhmm. I promised you, that my moment, would be my moment. This is it.”

Watching Lucas’s face during this whole scene is priceless. His dialogue along with his face are telling the story of a boy who has loved a girl deeply, and feared he would never get to have her. You know that feeling when you are looking at your favorite thing? Or when you can’t believe that you are so blessed as to experience something uniquely wonderful? That is what Lucas is feeling.

Riley has the sweetest response. Her face is both surprised and thrilled. She has hoped and dreamed for this, and yet, she’s still in awe of the fact that she is this blessed. She’s on the verge of tears this entire conversation.

The climax is when Lucas pulls out a jewel box- momentarily freaking Riley out- and produces a purple jellybean.

“It means you, Riley, I choose you. And I really want you to choose me.”

He’s had that purple jellybean in the ring box this whole time, even when he thought the triangle was still a thing. This is the biggest clue of all, it has been Riley all along.

Look at Lucas and Riley’s faces, they both landed on the right person to talk to.

The long game, playing for the future

Both Josh and Maya, and Riley and Lucas have the gravity and maturity that few people their age have. They think long-term, not just about instant gratification which often leads to heartache and poor choices. Their relationships are built to last.

Riley and Lucas talk about landing on the right person to talk to for the rest of your life. They aren’t in this just for the momentary fuzzies (even though they are enjoying the fuzzies), they are willing to work for this long term.

Whether that ends up happening or not, you will always make better decisions when you keep your head on straight and think about long-term results. Cory and Topanga modeled this when no one else did, and it is changing how relationships are depicted on GMW.

Josh and Maya know it’s too soon for them to be together. Still, they are grown up enough to recognize the value they see in each other and their desire to be together. Real love is willing to wait. Real love plays the long game.

Girl Meets World does it yet again, overturning cheap, cultural tendencies and instead promoting life and commitment.

I held my breath during this entire episode. I knew what I wanted to happen, and yet, my imagination never came close to the glorious result that is this episode. Well done writers! Well done actors! Well done everyone, you make a show that is a gift our world.

Also, Girl Meets World needs a Season 4 and MANY more seasons to follow! Here’s to taking on the world for many years to come!