Placed in a very new era of Star Wars, Star Wars Resistance is the third animated series to tell untold stories of our favorite galaxy far, far away.

Reason 1: Dave Filoni Is A Jedi Master At Storytelling

Dave Filoni has earned my trust as a storyteller. He never ceases to intrigue me, surprise me, and leave me feeling as though I have been fed a rich and fantastic meal, even though the “cuisine” varies for every show.

The Clone Wars was heavy with layers, awesome in the moment but also bearing the weight of the impending collapse of the Jedi Order/Republic and the rise of the Empire. We feel the clock ticking down in every episode as heroes and villains battle for dominance in the dying sun of an era.

The Clone Wars gave the Prequels a greater sense of purpose and meaning, and it taught us that even the battles that are lost in the moment still matter and pave the way for future victories.

Star Wars Rebels (my personal favorite) carried on the tradition with a much simpler approach to the story. We had a smaller cast of characters but got to go far deeper into the intimate familial relationships they created. The character development was gorgeous.

Threads that had begun in the Clone War era were woven into this raw and gritty Rebel world with the deft hand of a master weaver. Season 4 of Rebels contained some of the most breathtaking Star Wars storytelling and lore I have ever seen in my life.

Hope is the key theme of this series and it was fully respected. I ended the show in tearful wonder.

Each of these stories has the potential to merely be a copy of its predecessor show(s), and certainly mirroring scenes, as well as crossover storylines/characters, are used to each story’s advantage.

But Dave always makes something entirely new while maintaining the same heart in all of his work. It’s a delight to see each new thing created by this man because he has a gift.

Reason 2: Star Wars Resistance Will Only Have 2 Seasons

I do really enjoy this show, so I am sure that when the final credits roll I will feel some sadness about it ending. However, only 2 seasons means that they have a plan and they know where they are going to wrap up the story beautifully.

I will take 2 well-written, well-crafted seasons over Season after Season that gets watered down and wanders as the writers drift into apathy and unnecessary, trumped-up romantic drama. Or aliens.

Then again, this is Star Wars, so aliens wouldn’t really stand out that much.

Reason 3: The Timeline Is Current To Our Sequel Trilogy.

It’s so neat to be experiencing a show that is in “real-time” with the movies we are currently enjoying. Filoni has connected the show with the movie story so perfectly.

You know what happens in The Force Awakens, this is the story leading up to that story. We get a delightful peek into the build-up and behind-the-scenes of The First Order, The Resistance, and some of the chief characters who are at the center of these dramatic events.

The new season will serve as a bridge story that takes place between The Last Jedi and The Rise of Skywalker.  “The final season of Resistance takes place during The Last Jedi and leading up to the events of The Rise of Skywalker,” a Disney rep said. “With the movie coming up in December, this was a natural place to end the show with an epic finale.”

Reason 4: Kazuda Xiono Is Truly the Most Unlikely Hero For the Main Character

Our previous show MC’s were both Jedi proteges, Ahsoka Tano, and Ezra Bridger. Both of those characters were very intuitive, had street smarts and raw skills that gave them a leg up on their journey to becoming some of the most powerful characters we’ve ever met.

The movie MC’s have also been “Chosen One” levels of awesome.

This kid could choke on the air without breaking a sweat. He essentially does half of the time. You’d think that would be annoying but in actuality…

He is an incredibly skilled pilot, but he didn’t gain any real-life skills until a mission to deliver a message to the Resistance put him in the direct path of none other than Poe Dameron. 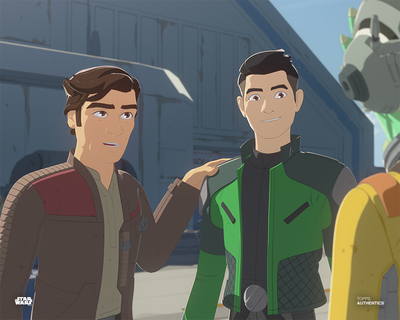 Poe sees something in Kaz, a spark of potential that he is willing to blow into a flame.

Kaz leaves everything he knows overnight to be stationed on a remote oil platform and spy on behalf of the Resistance, gaining intel about the platform and potential First Order involvement.

And he’s terrible at it…for a while.

This kid has no practical skills, no idea what anything costs or is worth, and is about as low-key as a town parade. Why on earth did Poe choose him to be a spy?

The greatest gift of this show (and there are many) is watching Kaz grow and succeed against all odds, even against himself.

His determination to not let Poe down, as well as his genuine love and concern for the people around him, transforms this awkward and messy kid into a brave leader. By the end of Season 1, we too see what Poe saw within Kaz. 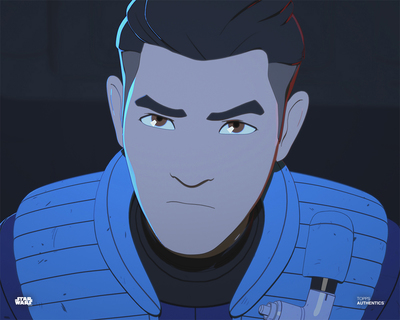 The New Era of Star Wars is all about the idea that anyone can make a difference, whether you are a stormtrooper, a scavenger, or a spoiled rich kid with a heart that’s often bigger than your brain. Resistance emphasizes this concept in a very visual way with the character of Kaz. It’s deeply encouraging.

Oscar Isaac is the most believable voice role I have ever heard in my life. If you have not gotten enough of a Poe Dameron fix from the movies then watch this show!

Poe carries himself with the same lazy grace and daring decision making as he does in the movies. He’s 100% the Poe of the big screen, even down to his “selective hearing” when it comes to General Organa’s orders.

Oh yes, that makes for a purely delicious episode.

These flaws and tension in regards to his character add to the realism. To Kaz, he’s a hero and a mentor. But Poe still has room for growth, as we all do.

Poe shows up quite a few times throughout this series, and some of my favorite episodes include the ones where he and Kaz go on “missions” together. They are the kinds of episodes that, while still moving the story forward, are made by a fan for the fans who want to have a good time.

And any moment when Poe is on screen he is giving you a good time.

The Poe and BB-8 love is as strong as ever, which leads me to my next Reason.

To me, BB-8 is the best thing since sliced bread.

Every Star Wars story is marked by a remarkable droid. The Sequel Era is truly BB-8’s domain, and like every other droid in every other story, BB-8 essentially keeps everyone alive all the time. 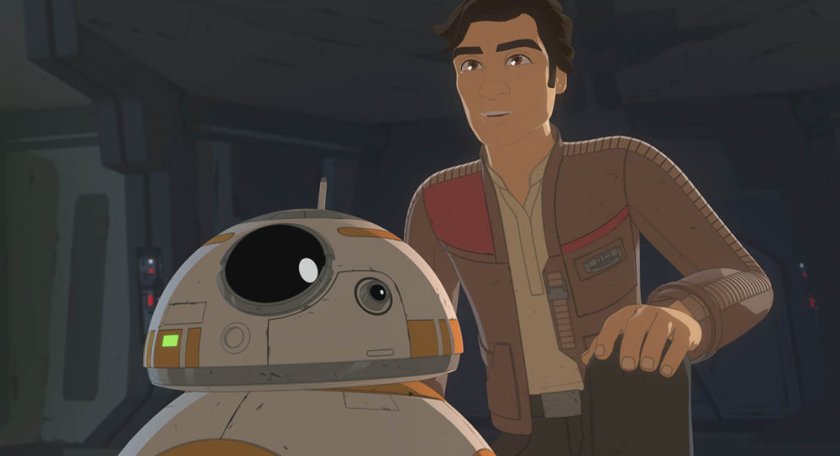 We get to see even more of his quick wits and antics, and as well as a hint of droid romance that just delighted my soul. How is it possible to love a little metal sphere this much? 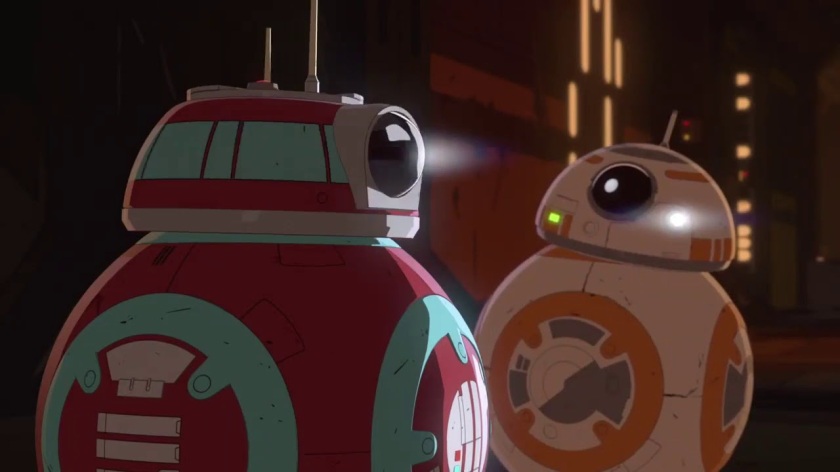 Reason 7: The World Is Fascinating

The Colossus is an oil platform in the Outer Rim. It’s a very self-contained and yet colorful world. This rig runs on an “everyone in their place” system that is both orderly and also confining to many of the characters.

The Colossus only works if everyone does their job, which makes for a sense of community that is hugely important for various parts of the show.

The most exciting aspect of this world is the regular sky races and the team of crack pilots known as “the aces”. They are the local celebrities as well as the protection force called upon when pirates attack. It’s a distinct culture where skilled pilots with good equipment sit at the top of the food chain.

There are the local regulars who add flavor and spice to the story.

Still, the constant threat of pirates and the regular visits from First Order officers remind the characters that they are not as “remote” and “safe” as they would like to believe.

This world is distinctly Star Wars without having any visible connection to The Force, the planets/systems we are more familiar with, or any Force-sensitive characters.

It’s exotic, it’s full of unique species and people, it has its local heroes and villains. It has its “monsters”, local politics, and time-honored traditions.

We’ve stopped off at places like this before in Star Wars stories, but never have we set up shop in one. The setting is a delightful treat. 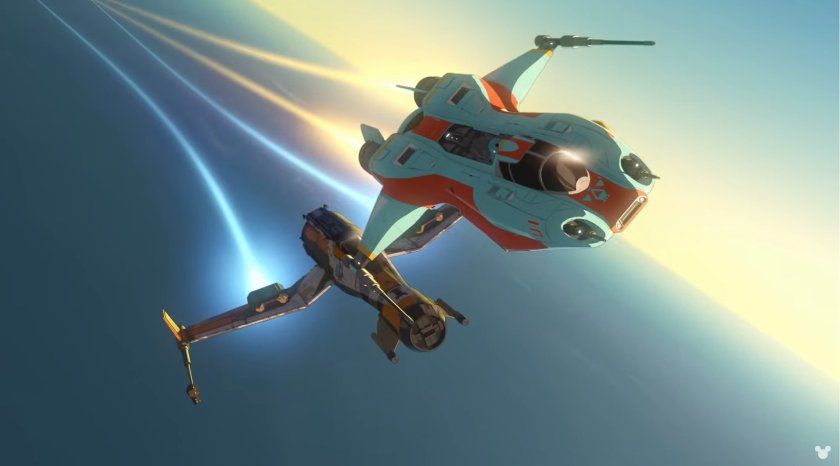 Reason 8: The First Order Is An Unkown

As an audience, our first introduction to The First Order came through the eyes of characters who knew their threat well.

Finn fled its cruel tyranny. Poe was teething and fighting The First Order at the same time. Leia has been at war with these kinds of baddies her entire life, she was literally birthed at the beginning of the struggle. Rey was introduced to them via surprise air raid.

But the characters of Resistance? To them, The First Order is unknown.

Is it the oppressive Empire all over again? Is it a vague and irritating shadow? If we just mind our own business the First Order will surely mind theirs…right? What if they are actually here to help us?

It is a neat perspective to see how different characters view TFO and how the unfolding story affects them. Off-hand comments and lightly expressed perspectives suddenly gain intensity and weight as life gets more serious.

As the season builds towards the climax, the audience sees the stars aligning to the well-known events of The Force Awakens and the tragedies that are unsuspecting characters are in for. If only we could warn them.

It’s painful to see the places where ignorance and deception in regards to The First Order’s villainy lead characters into places of loss and heartache.

Reason 9: Responsibility, Discovery, Redemption Tragedy, and Betrayal Take It To the Next Level

Dave Filoni lulls us into a false sense of security with Resistance. He uses a much lighter touch with these characters as well as a more relaxed and goofy sense of humor. This is certainly the most “kid-friendly” series he’s made thus far.

But do not let that light touch fool you, this show tells a compelling story that brings many characters on a journey with real themes. Some things will lift your spirits, other things will break your heart. 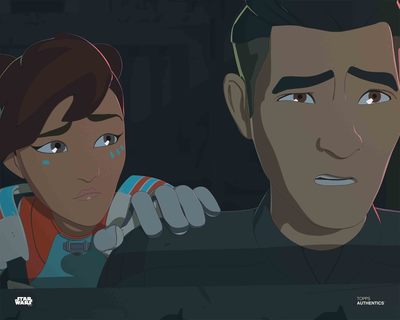 Reason 10: We Ended On A Cliffhanger Heading Into Uncharted Story Territory

For once we don’t know everything that’s going to happen next, just like our characters.

We know what more of what they are capable of and where they still need to grow. Our characters have surprised us and taken us on a journey.

But starting Season 2, we all know their biggest battles are yet to come.

It’s not the longest Star Wars ride we’ve ever been offered, but it’s a good one.

There are still unanswered questions, looming threats, and broken hearts.

Star Wars of any era carries that golden quality that sets the really good stories apart from the mediocre ones.

It’s constantly showing us a reflection of our real world and our real stories.

This reflection just happens to take place in a galaxy far, far away. 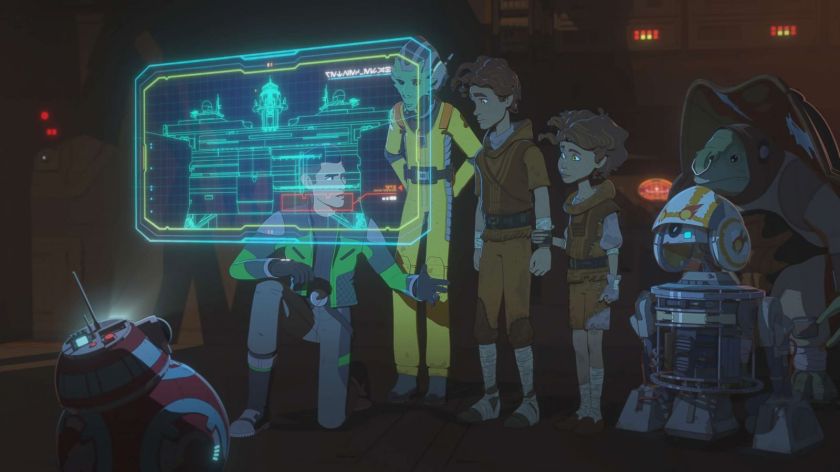