Season 6 premiere of the popular DC show The Flash airs Tuesday, October 8th on The CW at 8/7c.

Barry Allen is the definition of what it means to be a hero. He is selfless, brave, loving, and redemptive. Barry Allen strikes a beautiful balance of being an imperfect human who continues to save the day over and over again by doing what is right.

In storytelling, a good balance must be struck between the light and the dark. The Flash has had varied success in creating its Big Bads, and today I am going to rank them from Best Villain to Worst Villain.

The electrifying villain of Season 1 has continued to dominate in all of the following seasons as the monster who is always hiding under the bed, just waiting for a chance to come out and wreak havoc again!

As far as origin stories go, I personally find Eobard’s “I could never be you so I became the reverse“ a pretty lame excuse for villainy. Then again, whoever said villains had to come up with decent excuses to be legitimate? Because Thawne is without a doubt the most solid villain to ever sully Central City.

Every villain is meant to be either a reflection or warped version of Barry Allen himself. Savitar was actually a time remnant of Barry Allen, which made his intention to murder the love of Barry’s life (Iris) right in front of him seem even more twisted and horrific.

Season 1 has been my favorite season thus far but I have to say, Season 3 brought it when it came to terror! The entire Season felt like this horrible ticking clock that led to impending doom. Every episode bringing us a little closer to the edge of a cliff we could not escape from.

Savitar felt unbeatable, supernatural, and that made him an A+ villain in my opinion.

Season 3 really brought Barry full circle in the arc that he began with during Season 1,  and it took someone as close as himself threatening to take away the person Barry holds most dear to reach that point. The character work of this season was phenomenal and heartbreaking.

FYI – I am to this day still not over losing HR. 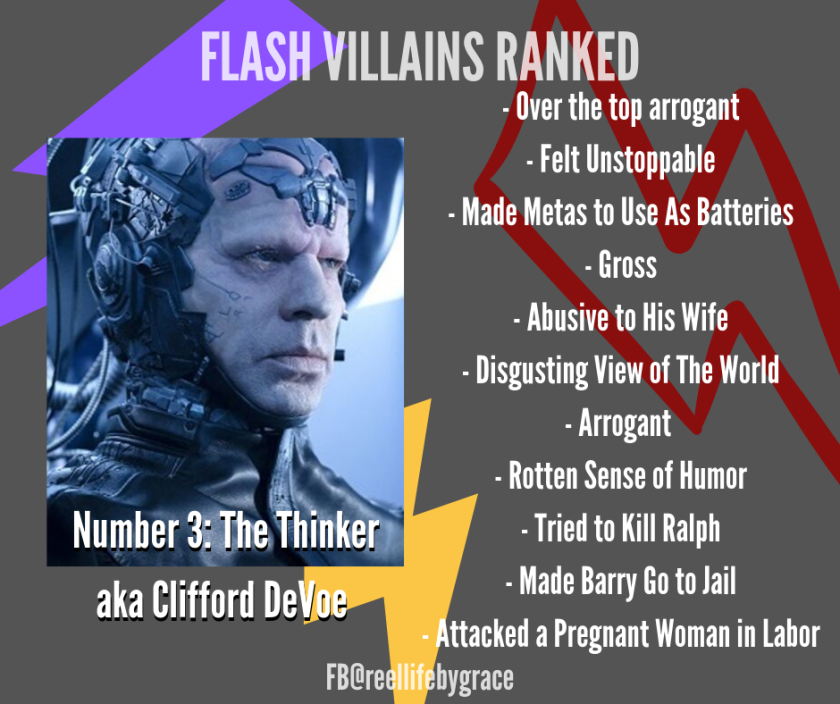 Season 4 was not my favorite, but no one can deny that DeVoe was a force to be reckoned with. He challenged Barry and Team Flash in a way that no speedster ever could. He began as an almost likable person with his beautiful house and supposedly “happy” marriage to his wife – a strange comparison to the unity and strength of Iris and Barry’s now marriage. Two couples going head to head, it was new take on the good vs. evil battle.

But as the season went on we saw just how rotten DeVoe was from the inside out. How meticulously he had planned everything. DeVoe was disgustingly arrogant and truly felt unbeatable! While his arrogance annoyed the heck out of me, it was nice to have a villain that was so hard to thwart (unlike the villain of Season 5).

I have to take issue with Barry’s “no-kill” rule here (and a few other places). While I would not want to rush to flip the switch on anyone, Barry literally begged Ralph not to kill DeVoe when they had the upper hand for the first time all season! At that moment, it was the only way DeVoe would have been defeated. Considering that DeVoe intended to alter the world and had no issue killing or controlling anyone (killing pregnant women, drugging his wife, etc), I don’t know,  Barry, I think we have a Hitler situation here.

It was a great triumph to me that love, a petty emotion DeVoe had scoffed at, was the chief reason he was defeated. The mind is great, the heart is greater!

Zoom had a cool villain appeal. His very unpredictability made him a severely uncomfortable villain to have around. I don’t know how Team Flash could sit and drink coffee when they knew this creep could just zip in and rip them to pieces at the drop of a hat.

And yet, he fell somewhat short of his potential. He felt more like a deranged toddler running around and causing chaos just because he wanted to. He could have done so much more damage. While this definitely qualifies as “villainish” behavior, in comparison to villains like DeVoe and The Reverse Flash whose plans have plans, Zoom did not make the grade.

True, he was going to destroy the multiverse, but it was merely so he could be the fastest man in the universe. A rather childish ambition to the villain who had never grown up. Understandable, but the success/fear factor was outdone by the Master Planners like DeVoe/Reverse Flash and terrifying monsters like Savitar. 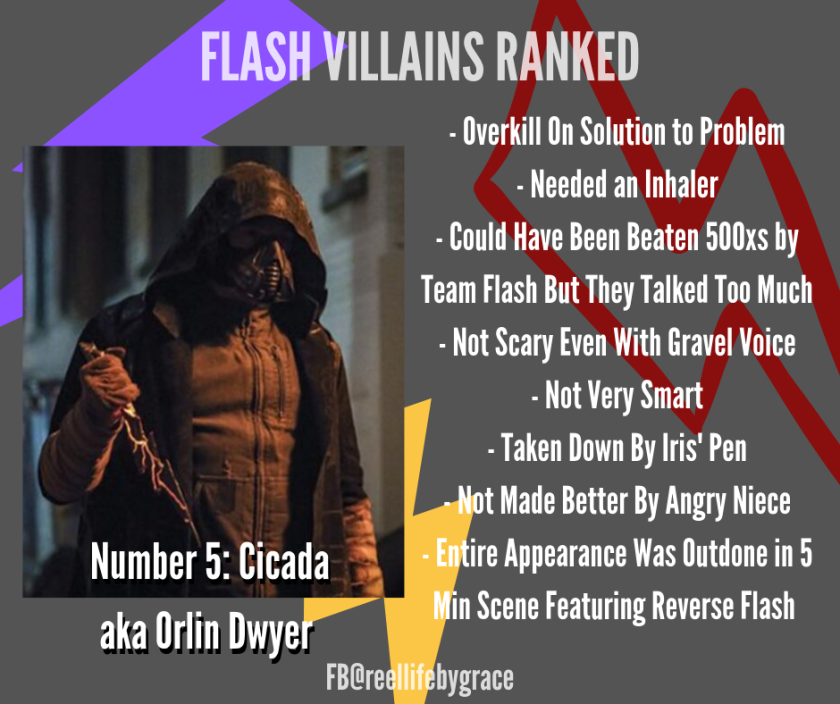 Season 5 was intriguing with the new angle of Barry and Iris spending the entire season with their adult daughter. I am a sucker for a parent/child storyline, especially when the parents are almost the same age as their children. Barry has fatherhood potential written all over him, and I thoroughly enjoyed watching the West-Allen family be together even if Nora could ruin a good thing in about five minutes.

But Cicada? Why was Cicada considered a strong enough Big Bad for an entire season of The Flash? The answer did not come until the true villain, The Reverse Flash, entered the picture. His scenes always upstaged Orlin or Grace Dwyers’ scenes, he was the truly villainous force this season, Dwyer barely felt like a sideshow.

Cicada could have been removed from circulation so many times and Team Flash was “foiled” in the most ridiculous ways. I get that we are living in a pretend world where mind-control gorillas and professor sharks are a thing, but that does not mean the believability in writing needs to be sloppy. It was horribly sloppy this season, and Cicada failed to strike fear in me at all.

Without a doubt, the King of Flash Big Bads is The Reverse Flash and considering that he started us off on this journey, perhaps that is only fair. 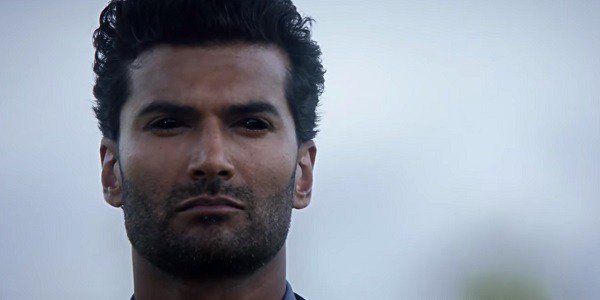 Bloodwork aka Dr. Ramsey Rosso is the new Big Bad for Season 6.

He looks as if he has potential. He’s not a speedster so clearly, the answer will not be just run faster. This is not just a mind or a speed game, it’s a new game altogether.

He’s a peer to Caitlin Snow (can this girl catch a break with anyone outside of Team Flash?), making him a known person to the team pre-villain years. Will he use this familiarity to his advantage?

His powers will be incredibly unique and gross.

He seems suave and self-assured without the opulent arrogance of DeVoe or the sneering attitude of Eobard Thawne. A calm villain is sometimes the most frightening.

I get a chilled feeling that he truly believes himself to be the hero of this story and those types always scare me the most. A villain with conviction who believes themselves to be the hero will go farther, justify more, and approach the battle in ways lesser villains will not. I fully anticipate all of that from Bloodwork.

So, I have ranked The Flash villains from best to worst. Do you agree with the rankings? What is your take on Bloodwork and the direction for Season 6? What will happen to Barry Allen during Crisis On Infinite Earths?