It is the 25th post on reellifebygrace today! I thought I would have some fun with this number and keep it simple by sharing 25 of my favorite movie lines. These are in no particular order and are merely here to make you smile.

I am a big South America fangirl. I understand the deep wonder and excitement that Ellie and Carl have for that mysterious continent. Not to mention, this scene is just the cutest thing ever.

Han and Leia’s romance is one of the top movie romances in the world. I love, LOVE their interaction. This scene is so iconic to Star Wars fans for so many reasons. My favorite bit of trivia about this scene is that Harrison Ford came up with his classic I know response on the spot, and a legendary line was born.

To top this amazing line off, the roles are later reversed in Return of the Jedi when Han says “I love you” to Leia. She gets a twinkle in her eye as she replies “I know.” What a great tie-in between the two movies.

3. “Uh, mebbe I shoulda hooked him up to Bessie, an then took the boot off.” (Mater, Cars)

A classic “DUH” moment that is made totally adorable by Mater. He takes Lightening McQueen’s handcuff “boot” off before he hooked McQueen up to Bessie, the enormous asphalt machine.  My dad always laughs at this part, so it is a fond moment for me.

4. “My mother was a caterpillar, my father was a worm, but I’m okay with that now.” (Khalil, Veggie Tales: Jonah)

If you have never seen Khalil the caterpillar, look up some clips on Youtube. He is utterly hilarious and a top-quote character for Veggie Tales fans. 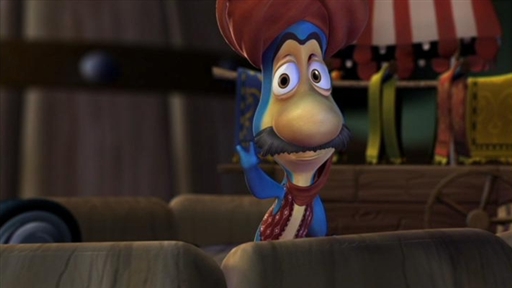 5. “I am expressing multiple attitudes simultaneously. To which are you referring?” (Spock, Star Trek: Into the Darkness)

Emmet is totally adorable, and this line cracks me up. I can just see Chris Pratt saying this himself. I’d be willing to bet Chris Pratt really is Emmet in so many ways. I feel like if we went inside of Chris Pratt’s mind we would find a double-decker couch in there somewhere.

There are a million hilarious and quotable lines from this movie, I had to just grab one off the cuff.

Again, so many quotable lines to choose from in Frozen, but this one always cracks me up because of the timing. Anna’s hair is turning white and it’s freaking Kristoff out. Her cute little feminine query, “Does it look bad?” is something so many gals can identify with. Poor Kristoff waits a half second longer than he should to reply, and his fate is sealed. So many males identify with this.

8. “I’m just a kid from Brooklyn….I can do this all day.” (Steve Rogers, Captain America: The First Avenger)

I make no secret about my love for this guy. I really feel like these two lines (they are really a part of the same thought) entirely sum up this extraordinary guy.

It’s even better because of all of the follow-up times when Steve uses his signature lines. He never gives up. It’s the Steve Roger’s version of just keep swimming.

How do you compete with that?

This kid is so stinkin’ adorable. I fell in love with him on like Line 3. He was so unlike any of the previous Star Wars main heroes. He was so not confident he felt so normal and human. His instant crush on Rey is all the cuter as he seeks to impress her with his “Resistance” status.

10. “What do you still have it for?!? I can’t believe you had THAT in your purse!” (Rocket Raccoon, Guardians of the Galaxy)

Obviously I just picked out one gem among that treasure trove of quotable lines that is Guardians of the Galaxy. This one however, cracks me up even when I’m not watching the movie.

The orb just blew up and the Guardians are all in shock. Rocket’s line is hilarious enough, but it’s made even more hilarious by the fact that he and Peter Quill start having the purse vs. knapsack argument right then and there.

Using this line as a comeback will either end the argument with your opponent defeated, or you will make a new best Disney friend.

I’m going for more comical than deep today. Pippin is a great moment of comedic relief in the epic but exhausting saga that is Lord of the Rings. This line is so hilarious in that you-have-no-idea-kid kind of way. It’s even funnier because this stupid line totally breaks up the solemn and dramatic gravity of Elrond’s “you shall be the Fellowship of the Ring” statement.

What an adorable idiot!

Jane is a highly underrated Disney lady. She’s charming, adorable, and says the cutest things. She has the most rambling way of getting to the point. It’s even cuter how her round and squishy little professor Daddy follows her bizarre thoughts easily.

This line is when Jane returns from  having met “the wild man” Tarzan. She’s babbling away about this strange creature, only to stop in the middle of her ramble to talk about the theft of her boot. I do this sometimes, so this line always cracks me up. I can’t find this particular line, but here’s a cute scene that will give you a great example of her adorable dialogue.

14. “These mashed potatoes are SO creamy!” (Midge, While You Were Sleeping)

I cheated by using this line to introduce one whole scene full of hilarious lines. Lucy is eating dinner with Peter’s family and about 3 different conversations are happening at once. She and Jack never say a word but smile at each other through the chaos. It’s a hilarious scene, one that I completely understand because I grew up in a large family. I promise you, this is completely realistic.

This movie is priceless!

This gif works for EVERYTHING.

16. “You should know, that this is the strangest thing I’ve ever done!” (Flynn Rider, Tangled)

Flynn Rider broke so many rules for Disney guys, I think that’s why he is so beloved. This scene is hilarious.

This is everyone literally every time they see something adorable.

19. “I’ve never put on pantyhose, but it sounds dangerous.” (Joseph, The Princess Diaries)

Fellas, you just have no idea the truth of this statement. I laugh really hard at this line because pantyhose are HORRIBLE! They itch, they pull, they rip, they slip, and you have no guarantees about the length of your life when you start putting them on. They are DANGEROUS!

20. “Thank you for nothing, you useless reptile.” (Hiccup, How to Train Your Dragon)

Hiccup Haddock is one of the greatest things animation has ever brought the world. I flat-out adore this guy. His dry and sarcastic sense of humor is one of the best aspects of this character.

There’s a reason Chris Pratt keeps sneaking in here. He’s amazing. I love Owen’s face when Claire looks expectantly at him after asking him to track down her nephews. He gives her this look repeatedly throughout the movie.

Loki gets the best lines. This is a great way to express your emotions in a situation without getting profane.

Mark’s running dialogue for this movie was utterly amazing. He had a great sense of humor that kept things from getting too heavy. Amazing!

25. “If I see one, I shall inform you immediately.” (Jack Sparrow, Pirates of the Caribbean: The Curse of the Black Pearl)

This is one of my favorite little interchanges throughout this funny movie.

And there you have it! 25 great movie lines from some wonderful movies. This was actually far more complicated than I had anticipated. Good thing I chose to do this post for my 25th instead of my 100th. Merry movie-watching to you all!