It’s no secret that Tangled‘s Flynn Rider has been a favorite among Disney fans since his introduction in 2010. He was one of the key elements that made Tangled a level above it’s predecessor Disney movies.

Flynn really broke out of the mold of boring and backstory-less Disney men and is really one of the most engaging characters to date. He wasn’t just a pretty face (let’s be honest, though, he is incredibly pretty), there was so much more to his character.

I could go into greater depth about the brilliance and complexities of his character, but I’ll save that for a later date. Today, let’s just enjoy a few of the primary reasons that we all love Flynn Rider.

Tangled really ushered in a new era for Disney. While many beautiful and charming movies had been made before it, Tangled introduced a finer 3D level of animation to the big studio. Pixar had been doing this kind of amazing animation for a long time now, and I think it is greatly due to Pixar’s involvement in this project that it turned out so well.

The facial expressions in this movie are just amazing. I always say about Tangled, “They told an entire story using eyebrows.”

By far the most prominent eyebrows belong to the one and only Flynn Rider. His facial expressions are just amazing, and with the slightest tweak of an eyebrow he completely changes the mood.

And what is the top Flynn Rider facial expression? I don’t really need to answer that for you, because we all know.

2. His Love/Hate Relationships with Animals

It seems like everyone in Disney is some kind of animal whisperer (Snow White, I’m looking at you). How many of us have had unrealistic expectations set for our human/animal interactions because of Disney movies? Seriously, I could whistle until my lips bled and still no birds would show up to help me clean my room.

Flynn Rider is not your typical Disney character. He actually seems weirded out by the hyper-intelligence of classic Disney animals. His interactions with Pascal and Maximus are hilarious.

He goes through 3 stages of animal interaction in this movie. 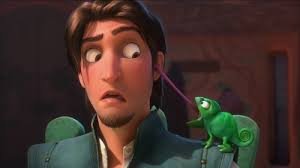 (2) He  moves on to feeling the need to justify himself.

“You should know that this is the strangest thing I have ever done!”

(3) He starts talking to animals even more casually and normally than the other characters. He doesn’t have the sparkly, awe-like interaction that other Disney characters have with their animals. He moves right on to normal, person-to-person interaction. He and Maximus might as well be brothers who grew up tussling with each other.

Yes, I know Aladdin also fits this qualifications, but Aladdin was immediately more selfless to start than Flynn is. *For the record, I adore Aladdin as a character and his movie is my favorite of the older, Disney “princess” movies. More on that another time.

Flynn stole a crown and left his partners in crime to the hangman’s noose. His only goal for the beginning of the movie is to get that crown and make a fortune. He tries to discourage Rapunzel from following her dream so that he can fulfill his sooner.

(2) He didn’t fall in love at first sight. More on this at the end.

(3) Again, he’s not really sure about these hyper-intelligent animals. See above.

(4) He doesn’t SING, not on his own initiative anyway.

(5) He has a deeply compelling backstory.

Very few Disney men are given interesting backstories, they are more the eye candy for whatever princess is doing her thing. I think Disney is starting to get the picture that maybe we want interesting men and women characters, it has been announced that Prince Charming will be getting his own backstory made into a live action film

The reveal of Eugene Fitzherbert, the orphan boy who loved the book about Flynnigan Rider was precious and compelling. It opened the door for Flynn to soften his heart and let a new, golden dream in. This moment was huge for his character development and setup for that glorious sacrificial scene at the end of the movie.

All Disney princes are gloriously beautiful (hold back the dimples, Eric, we can’t handle dimples that deep), but none of them ever acknowledge it.

Flynn knows how gorgeous he is, and he completely uses that to his advantage. Don’t get me wrong, I love men with humility, but this very real character flaw of Flynn’s was fresh and hilarious.

Flynn Rider has just got some great, very quotable lines, and his delivery could not be more perfect. He’s like the animated Han Solo of great line delivery.

Flynn Rider- You smell that? Take a deep breath through the nose.
[Breathes through nose]
Flynn Rider: Really let that seep in. What are you getting? Because to me, that’s part man-smell, and the other part is really bad man-smell. I don’t know why, but overall it just smells like the color brown. Your thoughts?

Flynn Rider- [sword-fighting with Maximus] You should know that this is the strangest thing I’ve ever done!
[Max flicks the frying-pan from Flynn’s hands]
Flynn Rider- … How ’bout best two out of three?

Flynn Rider- All right, listen! I didn’t want to have to do this, but you leave me no choice. Here comes the smolder.
[Flynn puts on a pout, hoping to charm Rapunzel. She just looks at him sternly]
Flynn Rider- This is kind of an off-day for me. This doesn’t normally happen.

5. Not Love at First Sight

Don’t get me wrong, I do believe in love at first sight.

But, if we were to take Disney’s word for it, love at first sight is the only way any beautiful romances happen.

That’s not the case for Flynn and Rapunzel, however. Flynn did notice Rapunzel’s pretty face when she first stepped out of the shadows, but a second later the first hint of awe wears off and he’s trying to sweet talk her to get his way.

He gains a hint of respect for her when she faces down the goons at the Ugly Duckling, turning the whole place into an impromptu Broadway performance; but it’s more of just admiration at the moment, love has not yet begun to bloom.

The evolution of Flynn’s love for Rapunzel was gradual. He didn’t let down his guard a bit until he thought they were going to drown. And then he shares something very precious and personal with her: his name.

Eugene represents the softest, realest heart of who he is. It’s the most vulnerable part of him, it represents a little orphan boy who never had enough but dreamed big. Rapunzel recognizes how precious that name is and uses it with great respect and gentleness. This attracts Flynn.

He sees the sweet innocence and beauty of her heart at the Festival of Lights. She soaks up every single moment with the joy of a child. Her pure beauty and warm heart are magnetic to Flynn. She is the most real, colorful thing he has ever experienced. She makes his dream of fortune seem black and white by comparison.

And then, he celebrates her dream with her. He spares no expense to make this moment the most special moment in her life. He understands how much these lights mean to her, he understands that they reflect her soul, which has felt trapped and captive. She trusts him with her most vulnerable place, and he treats her like a princess.

This scene is legendary and makes my throat ache.

He’s ready to go all in. He wants nothing in the world except to be with this beautiful, precious girl in front of him. He’s even willing to turn in the crown to the Stabbington brothers without a second thought. This is symbolic of him giving up his previous dream for a new one.

We know what happens. Evil Mother Gothel scheme, Flynn in prison, Rapunzel back to her captive tower, etc.

Flynn has an energy and desperation that he didn’t have before. Now, he’s not just fighting for himself, he is fighting for someone else. He’s always been resourceful and scrappy, but he’s never been in love.

He rushes back to the tower to save Rapunzel, only to be stabbed by Mother Gothel.

I gasped out loud when I saw this scene the first time. I did NOT expect that level of violence in a Disney movie. It scared me to death, a cardinal rule had just been broken and I didn’t know what to expect next. For all I knew, Maximus would kick the bucket the following scene.

Rapunzel willingly sacrifices her freedom for life in order to save the life of Flynn. I shall continue to call him Flynn, as I feel Eugene is really a special name that only Rapunzel should get to call him.

Flynn was bleeding out on the floor. He wasn’t exactly in top physical condition, no one would have blamed him if he was unable to do anything. He’s already gone above and beyond who he was at the beginning of the movie.

They move in for the kiss, and BAM! He slices her hair off, rescuing her and sacrificing himself.

This is such a well-written, well-rounded model for falling in love. The romance in this movie had so much more depth and maturity than any of the previous Disney Princess films. It opened the door for other amazing romances like Frozen’s Kristoff and Anna in the future.

Flynn Rider was an amazing character all on his own. He had his own set of circumstances, beliefs, and goals before he ever met Rapunzel. She didn’t change him immediately, but in time, being around her altered his priorities.

He was bold and sacrificial. His rescue of Rapunzel in no way diminished her strength as a character or threatened her capability, it only added to the rich interaction. Flynn Rider was a strong male character, paired with a strong female character, and the result was the best Disney princess movie anyone had seen.

Eugene Fitzherbert would be happy to know that he is every bit as legendary as his fictional hero, Flynnagin Rider. His fame has spread far and wide and we still enjoy his story.