I didn’t see this movie until just yesterday. The news surrounding casting choices for Pacific Rim 2 brought the film back to my attention. I had read feedback saying that the movie was all visuals with poor acting and storyline. I had my expectations set for moderate, but when I actually saw the movie I was blown away.

The visuals were unbelievable. This movie had to be incredible in 3D. Watching the battles between the massive Jaegers and Kaiju gave me a giddy feeling that only the greatest action movie battles can offer. I found the concept of connecting two people through “the drift” to be creative and fascinating.

The music was fantastic. I will listen to that soundtrack again and again.

I have noticed that many action films tend to rely on large explosions and intense gunfire exchanges rather than on good characters. Many action film characters are one-dimensional robots. For the men, they are filthy mouthed robots with muscles and stubble. For the the women, they are also filthy mouthed robots with muscles and chests. There is very little that I find approachable about these robot characters, and I most certainly do not end the movie feeling connected to them.

Pacific Rim could have limped along with action movie cliches for characters. They had visuals, battles, and explosions that were more impressive than most. I anticipated action movie cliches upon going into this movie, but what I found instead was a lovely cast of lead characters who had depth and personality. By the end of the film I felt very connected to them and wished to see more of their stories. Now, on to these surprising characters.

Raleigh Beckett, a former Jaeger pilot who lost his brother to a Kaiju. At first glance, I had anticipated Raleigh to be yet another muscle-bound fighter with a chip on his shoulder. I was so wrong. Raleigh, while bearing sorrow and scars, was actually about the nicest guy you could meet. He was brave, smart, and the most capable pilot available. But he never flaunted this fact, not once. Even when enduring taunts and slights from young Hansen, he kept a straight face and held onto his dignity.

You got the greatest view of Raleigh’s character when you watched his interaction with Mako. He instantly picked up on her skills and potential, and he wasn’t afraid to speak up for her. He valued her as an equal in their job, but at the same time he treated her like a lady. He is proof that chivalry can exist without chauvinism.

As an equal he believed in her skill, never gave her a hard time when she failed during the first drift, and was delighted to have her on board with him.

As a gentleman, he told her that she looked good in the uniform (which she rocked). When young Hansen was badgering Raleigh and Mako in the hallway following their near-destructive mind drift, Raleigh said nothing about the slights to himself. But the moment Hansen started calling Mako obscene names, Raleigh stepped forward in her defense and gave Hansen a good whooping. I’ll admit, I found that scene incredibly satisfying. And then, as the Gispy Danger was drifting down to destroy the breach, Raleigh made sure Mako got out in her pod first before he worried about himself.

Raleigh was relate-able in that he readily admitted to his emotions. He was deeply saddened over his brother’s death, and traumatized by the shared feelings he had experienced.

He was brave, stepping up to do a job that was likely a suicide mission. He treated those around him with respect. He knew his skills and was confident in them, but didn’t feel the need to flaunt those skills or prove himself. He was kind and encouraging to Mako.

I would love to see more male heroes like this in action films. Raleigh Beckett was a breath of fresh air. His humanness in no way compromised the strong, effectiveness of his character; but rather, it enhanced it by allowing me to connect with him. I want to see more of Raleigh Beckett.

Mako Mori, one of the programs “brightest and best”. Mako was everything that I could have dreamed up for a female heroine. She was strong, intelligent, and capable. But the thing that delighted me the most about her character were the softer aspects. She was very feminine, and she carried herself with a sweet humility that was refreshing. She was gentle and vulnerable, her character showed real emotions regularly.

Somewhere along the way, Hollywood decided that strong women characters needed to sterilize their emotions. Perhaps this was an over-reaction and poor attempt to compensate for the over-dramatized emotions women displayed in older decades of film. I don’t care for either extreme, since real women in the real world are a mix of both strength and emotion. I don’t know about you all, but I am ready for some real women characters that make me feel.

I felt when I watched Mako. I connected with her. She wants a chance to fight against the evil monsters who haunt her dreams and destroyed her family. She has worked very hard to get where she is. At the same time, she respects Marshall Stacker Penecost and knows that his negativity towards her involvement stems from love.

Mako wanted an opportunity to fight, but she didn’t insert herself to the point of becoming obnoxious. That’s fine, because her eager willingness is all that she needed to catch the attention of Raleigh Beckett, who went to war for her right to become his co-pilot. This created a fantastic point between the two characters where their separate character threads became woven together.

She didn’t fight it when Raleigh stood up for her, nor did she throw his efforts back in his face like many female characters would. Instead, she accepted it gratefully which gave her character all the more dignity and legitimacy.

Mako was adorable, strong, and endearing. I loved everything about her, from the soft way she spoke, to her blue hair, and her non-air-permitting hug of Raleigh during the end scene. Mako Mori was exactly what a strong female character should be. She was a real woman who I connected with and would love to see more of. 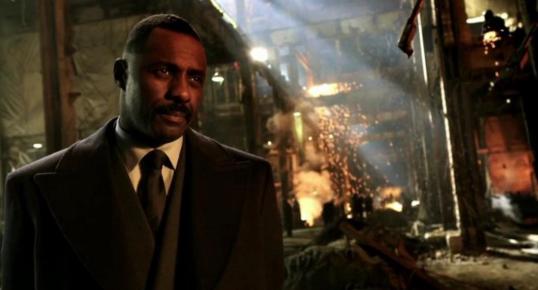 Marshall Stacker Penecost. He actually fit into a very typical action movie role of the veteran leader with a soft side. I don’t really mind those roles though, as this type of character lends a gravity to the story and creates a reference point for the other characters to revolve around. Plus, these types of characters are usual played by legends such as Harrison Ford, Liam Neeson, and in this case, Idris Elba.

I greatly enjoyed seeing (and listening to) Idris Elba in this role. He has a rich and handsome quality to him that is riveting. He wasn’t unnecessarily harsh, had clear motivations for his actions, and the thought of him raising a tiny little Mako was simply adorable. His death at the end of the movie was a fitting and majestic end to his character.

I really have no idea why this movie didn’t do well in the US. There were many moments that just thrilled me in my movie-fan soul. Seriously, watching the Gipsy Danger drag a cruise ship into battle to use as a weapon was so exciting. My life-long movie dream was fulfilled when Raleigh said, “Let’s check for a pulse.” on the dead Kaiju, and proceeded to blast it to death beyond a shadow of a doubt. No one ever makes sure the enemy is good and dead, and it often comes back to bite them in the rear. Future action heroes could use some pointers from Raleigh Beckett in just about everything. The music made me feel energized and excited. The characters were awesome. Oh, and a shout-out to the little girl who played mini Mako Mori, she SOLD that role amazingly. How many kids do you see who can pull off intense emotions like that little lady did?

I am so excited to know that there is a sequel in the works, Pacific Rim 2: Maelstrom. There is very little known about the movie as of yet, beyond the fact that it was just announced John Boyega will be playing the lead. His character will be the son of Idris Elba’s character. John Boyega brought new life to the screen in The Force Awakens back in December, and it is rare that I have connected with a character as quickly as I did with Finn. I look forward to seeing what both he, and this sequel have to offer.

What did you think of Pacific Rim? What aspects of it blew you away? Were there any aspects of the film that disappointed you? What was your favorite moment? Did you also connect with the characters?

If you enjoyed this post, then you will likely enjoy my other posts. Want to connect with me and talk all things movies? You can find me on Facebook and Twitter, and please follow my site for more great articles.

One thought on “What Pacific Rim Got Right About Lead Characters”