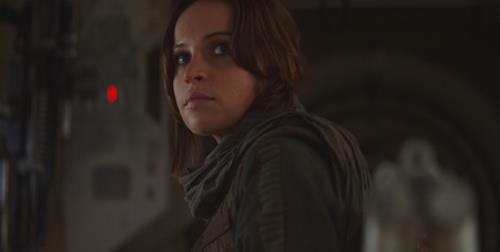 I imagine most of you have seen Rogue One by now. If not, do not read further as there will be spoilers included. And if you have, then welcome, Fellow Star Wars Fan. We are forever changed after seeing that film.

There is so much to say on the subject of Rogue One, I have several articles waiting in the wings, but for now, I would like to focus on the titular character of the movie:

Jyn Erso (Felicity Jones) joined the annals of Star Wars history as yet another deserving Star Wars leading lady. She owned her role beautifully and brought a level of human authenticity to the Star Wars world that was unlike anything I have yet seen. Not to say that the other Star Wars leading ladies have failed, quite the contrary, but their stories and roles are drastically different from Jyn’s.

Rogue One was such a raw and personal movie that it was only going to succeed if it’s characters were equally raw and personal. Jyn had a brief, but fiercely important role to play in the timeline of Star Wars. And because she played that role so well, she will never be forgotten.

I want to share a few specific things I found deeply attractive about this character, and why I am adding her to my list of real women in cinema.

Based upon earlier trailers for Rogue One, I was not at all looking forward to Jyn’s character. To me, she came across as untouchable and sarcastic. In fact, before the re-shoots, I have a feeling that may be closer to Jyn’s original portrayal. But more on that another day.

When the final trailer came out I was delighted to see that she actually appeared to be far more human than I had first believed.

My secondary impression was correct. We first meet Jyn as an innocent child, yet another victim of the Empire’s cruelty that robs her of both her mother and father. She’s a sweet little girl with braids and a stuffed doll that she drops when fleeing the Storm troopers.

As a young woman, you can still see that haunted and frightened look of a child in her huge eyes. She doesn’t walk around with a chip on her shoulder and an exaggerated swagger (she’s no Solo after all). Instead she goes through life with her head down and keeps running. Even when she is “rescued” by the rebels she attempts to flee. Her fighting reactions are that of a cornered animal rather than a fierce warrior. 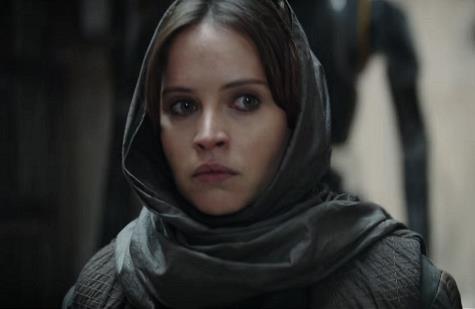 To me, this is far more accurate than if they had made Jyn some fierce and untouchable warrior. She has quite obviously gone through terrifying things, and she just wants to feel safe. She just wants her daddy back. Is there anything more human than that?

One of my absolute favorite moments in this entire movie was when Jyn saves the little girl during the raid in Jedha. She looked at that child and saw herself, and despite the fact that she has a huge survivor’s instinct, her instinct to protect that baby was stronger. Cassian tries to call her back, but she ignores him and runs into the crossfire. She scoops up the terrified little lady and returns her safely to her mama.  As much as that moment frustrated Cassian, he was also deeply attracted to it. Compassion is a rare quality, but it’s also one of the most alluring.

Jyn’s compassion extended further when she learned the truth about the Death Star and was given the information about how to destroy it. Her earlier instinct to get in, get out, and survive is once more overridden by her desire to protect others. Jyn’s heart for others is even bigger than her beautiful eyes. These moments were a beautiful illumination of her true heart, and made her an unforgettable character.

Hope, like compassion, is a rare quality. Jyn has a lot of reasons to stop hoping. She has been haunted and hunted by the Empire since childhood. They have taken everything from her and millions of others in the galaxy. She could just throw her hands up in despair, but instead, she chooses to grab onto hope and charge into battle with it.

Cassian was raised his entire life in this Rebellion. He’s used to sleepless nights, long odds, and big regrets. He doesn’t give up, and yet, even he seems to be awakened in a new way by Jyn’s hope and determination. Jyn’s sweet little quotation during the Rebel council,

“Rebellions are built on hope,”

was actually his original statement. And yet, Cassian’s reaction to her hopeful initiative is like someone coming alive again. It’s as if he is hearing that concept in a completely new, and reachable way. He is going into battle with a fresh countenance and renewed sense of purpose that only Jyn was able to awaken.

Hopeful people heal and rally those around them. Hope is like an infectious disease, it cannot help but spread. Jyn’s hope was beautiful and rejuvenating. She rallied an entire organization, a group of incredible and effective individuals around her because of her hope and determination. I have a hard time believing a jaded and sarcastic character would have been nearly as effective.

4. She was beautiful and ladylike

Despite the fact that Jyn was in one, practical outfit, went through multiple battles, killed storm troopers, climbed towers, and did a million other “dirty” things, she was such a lady. Being termed a lady has nothing to do with keeping your clothes clean or staying out of harm’s way, it is an overall bearing and way of carrying yourself in any situation.

Jyn felt so feminine to me. She wasn’t seductive once, she didn’t try to gain attention for herself, she didn’t constantly have to advertise how smart and capable she was. And yet, by the end of the movie during that dreadful and wonderful beach scene, you could see in Cassian’s eyes how much he loved her.

She was not unnecessarily crass and she wasn’t hardened and bitter. She was strong and tender.

Jyn was so, so beautiful. Her beautiful heart and wonderful character came out and clothed her as brilliantly as if she had been a member of Princess Leia’s court. Her daddy’s sweet nick-name Stardust was perfect for this lovely girl, for she sparkled and cast light like a beautiful star. 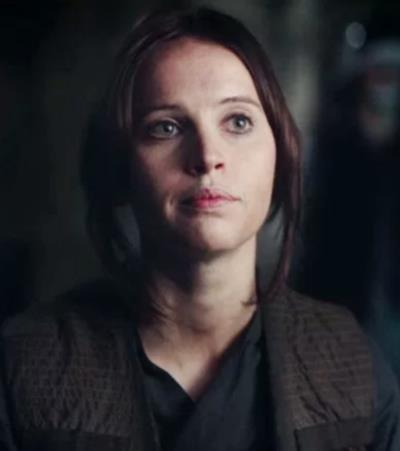 I loved the character work done with many of the characters in this beautiful and heartbreaking film, and Jyn was one of the finest. Gareth Edwards and Felicity Jones can be proud of what they accomplished with her, she was a wonderful character to grace the screen and I hope we have the privilege of seeing many more women like her in the future.

As I said above, I have more Rogue One articles waiting in the wings. I would love to hear from you all as well. What did you love about the movie? Did you love Jyn Erso as much as I did? What is one thing you thought they incredibly well?

5 Reasons Why Finn Is Still Going to Be a Jedi

6 Ways that StarWars: Rebels Differs From StarWars: The Clone Wars

Why Ezra Bridger Will Ultimately Choose the Light Side