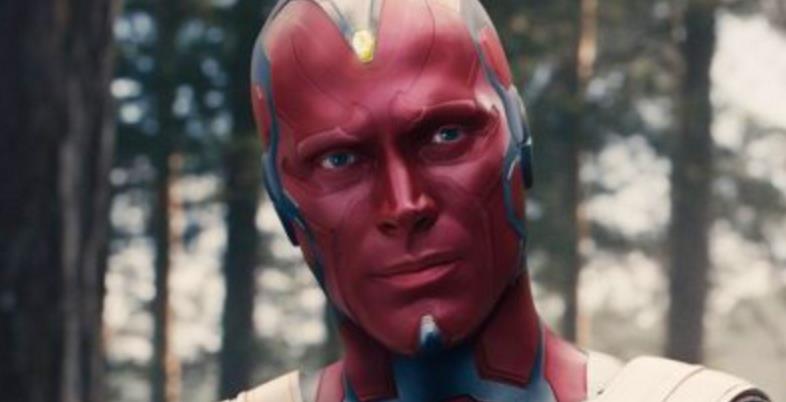 Vision feels utterly perfect. From the moment of his creation (whatever the heck happened there, still scratching my head over that one) Vision has come across as perfect. He never makes a mistake, he is never wrong. His perspective is so objective and gently stated (in a British accent) that you feel he must right. Oh, and to put the cherry on top, he can lift the hammer.

Civil War is the first movie where we really get a feel for Vision. He is kind, intelligent, and gentle. And yet, he doesn’t know what it is to be human. He wants to know, he wants to understand. He is fascinated by humanity in a very objective and curious way. He seems to be especially intrigued by Scarlet Witch and the enigma that she presents. She is so incredibly strange and powerful, and yet, still so human.

Vision actually has a conversation in Age of Ultron that does a great bit of set-up and foreshadowing for his role in Civil War.

“There is grace in their failings.”

Vision speaks to Ultron with a perspective that is far more positive towards humanity than that murder bot had. At the same time, the very manner in which he speaks of mankind shows just how little he actually understands about us.

In Civil War  Vision is quite obviously trying to explore humanity. He seems to sympathize with Wanda in that neither one of them seem to know what they are, and are both wary of what they are capable of. It’s like he is at the edge of understanding fear, but he still cannot enter into it. I think he may be beginning to understand compassion, and perhaps even one day love. His attentiveness to Wanda shows the potential for his character.

Then, the rubber meets the road, the stinking Accords are dropped on the table, and Vision goes back to his numbers, statistics (dumb statistics by the way), and objectivity. I don’t blame the guy, he doesn’t know any better yet. But I think the core issue, the one message that is lightly buried beneath the surface to be dug up is: perfection.

“I know we’re not perfect, but the safest hands are still our own.” Steve Rogers

Tony Stark is frustrated by the fact that he isn’t perfect. He struggles beneath the weight of genius, wealth, and a God complex that is starting to break him. In an attempt to create the perfect form of protection, Tony created Ultron. Ultron revealed more than anything else just how far out of reality Tony’s mind has gone when it comes to his actions. More on that tomorrow in, Civil War: The Tragic Tale of Tony Stark.

“Sometimes I want to punch you in your perfect teeth.” Tony Stark

Let’s be honest, Steve Rogers is about the closest thing to perfection that humanity has to offer. And yet, he’s still human. He hurts, he bleeds, he makes mistakes, and he faces consequences. His track record isn’t spotless, and he knows that.

How does this apply to Vision? The writers of the Accords find the perfect opening to produce their garbage following Wanda’s mistake which led to a bomb that killed several people. They are all over her for not being perfect enough. Yeah, demand the impossible and then get mad when there are some consequences. That makes sense.

Vision does what he thinks is right. He displays kindness and compassion towards Wanda, he even cooks for her. That scene was pure gold by the way, I really look forward to seeing where things go between the two of them. But he also holds Wanda back because of the Accords. She made a mistake and now the world is ready to go on a witch hunt (pun fully intended). Vision’s non-human perspective tells him that the Accords is the right course of action to ensure there are no more mistakes, slip ups, or horrible consequences. The Accords will ensure perfection.

A neat moment happens when Hawkeye comes to pick up little sister Wanda. Yes, I really think Hawkeye has become surrogate big-brother to Wanda while Steve has stepped into surrogate Daddy role. And do I find it adorable? You bet I do.

In this moment, Wanda makes a choice to overcome her fear of failing, and to keep trying instead. This is a neat culmination of that not-so-eloquent and yet totally awesome pep talk Hawkeye gave her back in Sokovia.

“Hey, look at me. It’s your fault, it’s everyone’s fault, who cares? Are you up for this?”

Vision doesn’t understand that Wanda has just accomplished one of the greatest triumphs we humans can reach: she overcomes her failure and gets back up again.

You cannot truly understand the beauty and joy of success until you understand the pain and fear of failure. Wanda has honestly been struggling with fear since the battle at Sokovia. She is terrified by what she can do, and terrified by her actions going wrong. Her fear of failure is something that we can all connect with. Failure often has consequences, and it can scare you away from trying any more. But in order to grow and move forward, we have to come to terms with our imperfection, embrace our mistakes, and then get up off our rears and keep going. The moment Wanda sends Vision (who represents the fear of her failure) cannon-balling down through the floor is a victorious moment of the human spirit.

On to the airport scene. Team Tony is getting their rear kicked when backup arrives. Vision is a formidable opponent as he can do what no one else can, and he seems immune to just about everything. After all, he’s Vision. What can go wrong?

Vision is doing fine and succeeding at every turn. And then he goes down to check on Wanda who has just been brought to the ground by War Machine’s sonic blasts. Again, another sweet scene between them. Vision wants to understand and connect with this woman so badly, and he seems to be developing real emotions regarding her. But there is still a distance between them, a barrier that he cannot seem to cross or grasp.

Uh oh! Falcon is bugging Tony and Rhody and getting in their way. Yo Vision, how about a little firepower over here? Vision carelessly looks up and shoots a powerful beam in the flying trio’s direction. A beam which Falcon avoids (because he is awesome) and instead, the beam hits Rhody’s arc reactor, sending him plummeting out of the sky. It’s a horrific moment that causes everyone to stop. One of their own is now lying motionless on the ground and there is no way to fix it.

Because you are never more human than when you fail.

The question is now: will Vision learn to triumph and get back up again?

Despite that fact that he is made up artificial intelligence, synthetic tissue, and robot parts, Vision can now understand what it means to be a part of the human race. If he wanted to grasp the human experience, he just started at ground zero. Vision has now opened the door for his character to fully embrace humanity and grow in understanding.

Vision appears to be the most infallible member of Team Tony, and yet, even he proves what we all already know. Perfection is impossible, no one can dictate it, put it into law, or build a machine to enforce it. The greatest thing we can do is to not get hung up on trying to pursue perfection, but rather learn to accept failure with grace and then keep moving forward.

Did you enjoy Vision’s character arc in this movie? What did you think of his interaction with Wanda and the other Avengers? Would you eat something cooked by someone who has never tasted food before? What do you hope they do with his character in the future?

6 thoughts on “Civil War: Why Vision Needed to Fail”