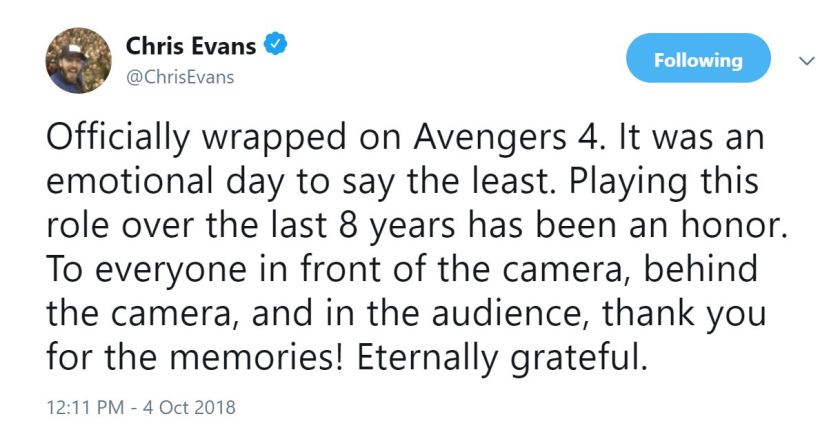 I skipped over this the other day because I was having a heavy week and I didn’t need to add to the emotion. But I have loved Steve Rogers aka Captain America too much to say nothing, and you are an integral part of that character. So here is my two-cents worth.

Steve fights wrong/evil ideologies and beliefs, which usually means fighting people, but Steve has a marked difference. He fights bloody wars and does so without hatred. There are millions of people today who have never actually had to shed blood to protect what they believe, and yet they still walk around full of hatred. They dehumanize those who do not agree with them. To them, mere disagreement is the same thing as actual evil and oppression.

I don’t want to kill anyone, I just don’t like bullies, I don’t care where they come from. (Steve Rogers, Captain America: The First Avenger)

There are actual people in this world who want to kill someone for the mere reason that the person disagrees with them. It’s sickening, it’s cruel, it’s evil.

Steve is a beautiful example of what freedom actually means. Steve knows what he believes, and he won’t apologize for it. 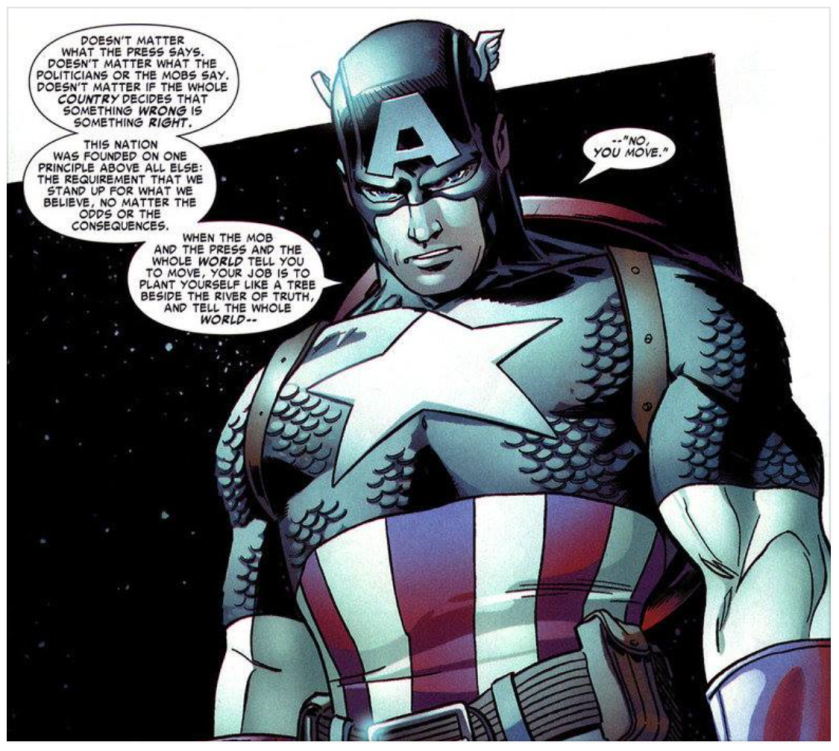 He’ll even die for what he knows to be true.

But he will not hate.

There was a marked difference in Steve Roger’s approach to his opposition in Captain America: Civil War, vs the government and even Tony Stark’s approach. They came with anger, blame, and misused the facts.

That’s one price he’s never been willing to pay.

Dear America, we have a lot to learn from Captain America. 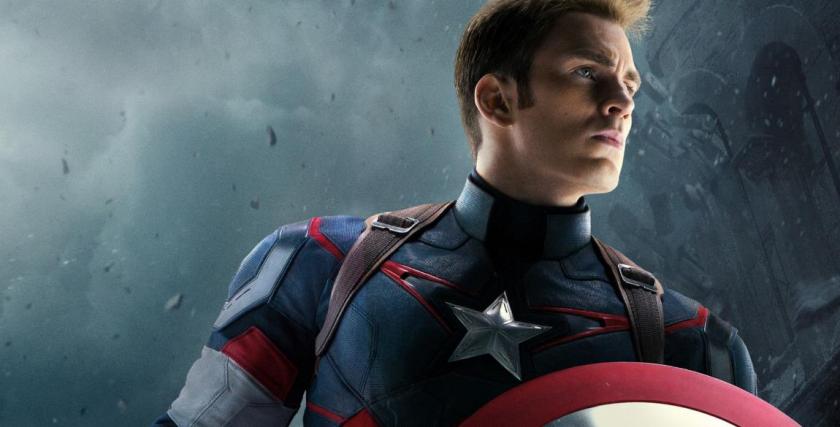 Steve Rogers is kind. He gives second chances all the time, even if it means he has to put himself at risk.

Steve Rogers is a gentleman. He treats everyone regardless of age, position, or gender with respect. He treats women like ladies while regarding them as valuable friends and partners in this battle between good and evil. His friendship/relationship with Natasha Romanoff is one of my most favorite things in movie history. Steve builds up the men around him, rather than tearing them down in order to make himself feel more powerful. That is what a truly powerful man does.

Steve is humble. He doesn’t live his life to prove something, rather he proves something every day that he just lives his life. He gives courage for normally weaker people to say no because he said no first, and because he believes in them.

Steve is the kind of best friend everyone wants. He never gives up on you even while he will also call you on the carpet about your crap. He’s the kind of friend who makes you better.

Steve is not perfect. He makes mistakes, he hurts people, he has good intentions that go awry. Sometimes he has a really bad day and he takes it out on others (essentially the first hour of Avengers.) That’s okay with me, though. Someone doesn’t have to be perfect for me to love them. Steve is a real person. He loves, he laughs, and he grieves. He does his best, he falls down and gets back up, and he tries to tackle the problem right in front of him. He has dreams, he has people he would walk through hell for, and he believes in things strongly. He’s a real person.

Steve Rogers aka Captain America is a hero of mine. For the past 6 years (yes, I got into the superhero game a few years late), he’s been a shining beacon of hope and delight for me. The past 6 years have been so, so hard. Hard, monotonous, ever-changing, exhausting years. But during all of that time, I have been watching Captain America.

I have worn the t-shirts. I sleep under a Captain America blanket at night. I have spent hours talking/writing about this character I adore. I have made new friends because of my love for Captain America.

Dear Chris Evans, the Steve Rogers/Captain America you have played has given me hope. He has encouraged me. I have memorized his/your face. The different moods, expressions, and feelings. I know what he would say in different situations.

I have a favorite Steve smile. It’s not a full blown, knock-your-socks-off-smile. It’s a small, quirk of a smile. It brings a sparkle to his eyes and I feel like I can see his soul. I love that smile. It’s one of my favorite smiles in the world actually. It makes me want to smile and cry all at the same time. And it gives me hope. It has given me delight. It has brought me sunshine on cloudy days. 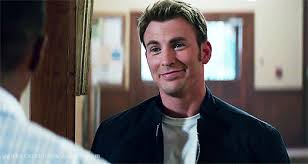 Chris, I don’t know you. But as a fellow human being, I know some pieces of you because I am the same. And I want to tell you something as another human being.

…you matter because God loves you and you were made in His image. And that makes you worth more than priceless gems.

I don’t know if anyone has ever told you that. I hope they have. I hope that in your life you get to discover just how amazing God is, how much He loves you, and that He is the thing your soul is lacking. I hope you find out that Jesus died for you thousands of years before you were born. I hope you discover that even if you had been the only person on Planet Erath Jesus still would have died for you because you mean that much to Him.

I hope and pray you will come to know that.

I don’t know if you will ever read this post. It’d be super cool if you did. 😉 But I wanted to say thank you.

Thank you as a 22-year-old-woman who is preparing to say “so long” to a favorite hero of hers, but not goodbye. Steve Rogers is an important part of the fabric of my story and he always will be.

Thanks again, and I’m with you to the end of the line. 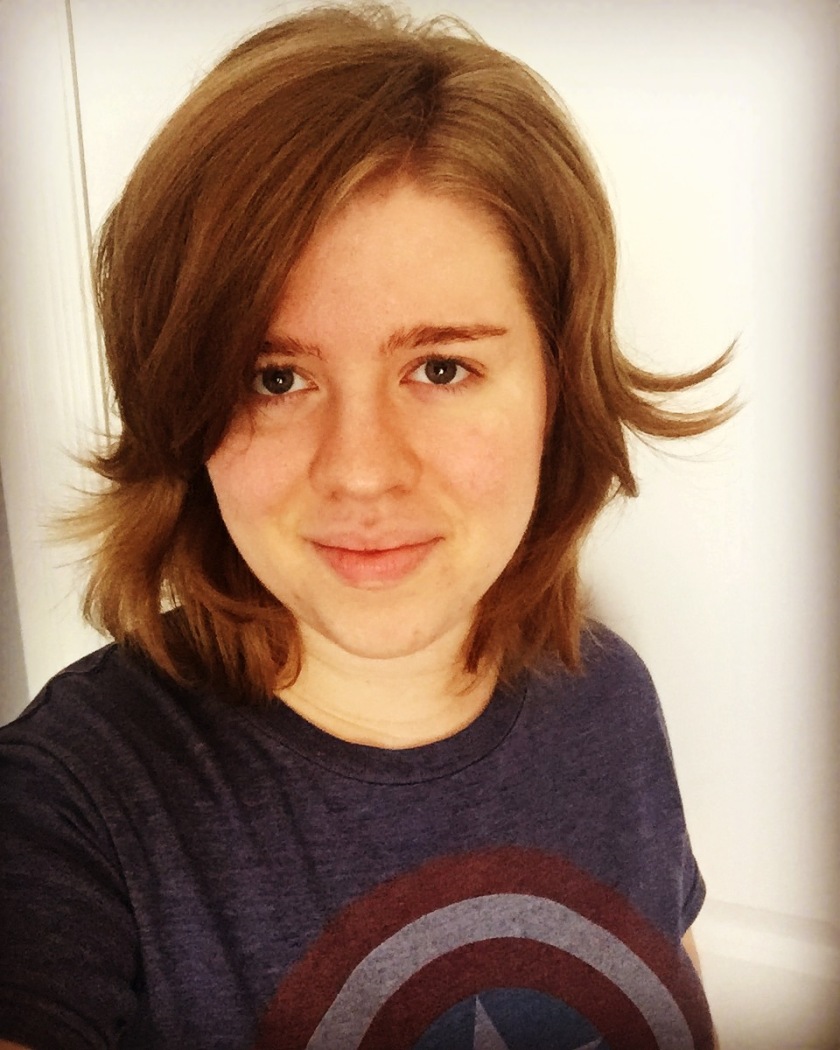